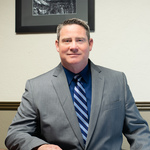 Dan Chandler retired from the United States Army after nearly 26 years in uniform. Dan graduated from the United States Military Academy at West Point with a degree in American Legal Systems, and later earned a master's degree in Homeland Security before earning his law degree. He is a retired combat veteran and a former Commander who understands the unique challenges faced by members of the military community, past, present and future. Dan spent many years at Fort Carson and understands the special requirements placed on local businesses when they deal with the military community.

After graduating from West Point, Dan served on active duty for the United States Army for nearly 22 years. His service included time in Korea, Germany, Kosovo, Bosnia, Kuwait, Texas, Georgia, Kansas and Colorado. Dan also had combat tours in both Iraq and Afghanistan. The most difficult assignment of his career was as a Brigade Rear Detachment Commander, where he was responsible for caring for wounded Soldiers, training replacements, casualty notification, and care of the families of deployed Soldiers. This experience solidified his desire to become an attorney and help people navigate the most difficult chapters in their lives.

Dan is an experienced criminal trial attorney. He is dedicated to taking the time to review client cases; explain the law; and help clients understand the consequences of their choices both within the justice system and on their personal lives.

In addition to serving in the military, Dan has traveled the world, living outside the United States for over a decade, in seven different countries. Dan believes that the life experience he gained prior to becoming a lawyer helps him to understand the great diversity that our world, country, and community has to offer. He approaches each case with an open mind, and a willingness to not only represent your interests within the confines of the law as it is currently practiced, but also with an eye towards challenging the legal system to ensure that our communities continue to grow and thrive.

No matter what you are looking for, Dan believes that open communications and honest assessments of the case are critical to meeting client goals. He looks forward to serving your needs.