Overview of the Military Justice System

As the U.S. Supreme Court noted in Parker v. Levy, the “differences between the military and civilian communities result from the fact that ‘it is the primary business of armies and navies to fight or be ready to fight wars should the occasion arise.” Id. at 743, citing United States ex rel. Toth v. Quarles, 350 U.S. 11, 17 (1955). The military is a “separate society” warranting its own military justice system.

The Preamble to the Manual for Courts-Martial (MCM) recognizes the importance of discipline as part of military justice:

“The purpose of military law is to promote justice, to assist in maintaining good order and discipline in the armed forces, to promote efficiency and effectiveness in the military establishment, and thereby to strengthen the national security of the United States.” Manual for Courts-Martial, Preamble, I-1 (2012). 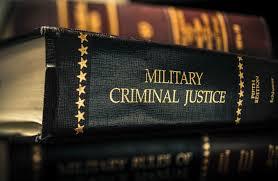 In order to provide for the common defense, the Constitution gives Congress the power to raise, support and regulate the Armed Forces. U.S. Const., Preamble, art. I, § 8, cls. 11-14 (War Power). Under this authority, Congress enacted the Uniform Code of Military Justice (UCMJ) in 1950. 10 U.S.C. §§ 801-946 (Articles 1 - 146). The UCMJ is the code of military criminal law and procedure applicable to all U.S. military members worldwide.

Nonjudicial punishment (NJP) provides commanders with a prompt means of maintaining good order and discipline and promotes positive behavior changes in Servicemembers without the stigma of a court-martial. NJP is conducted under Article 15, UCMJ and is not a criminal prosecution.

A summary court-martial (SCM) is the least formal of the three types of courts-martial and the least protective of a soldier's rights. The SCM is a streamlined trial process involving only one officer who theoretically performs the prosecutorial, defense counsel, judicial, and panel member (juror) functions. The purpose of this type of court-martial is to dispose promptly of relatively minor offenses. The one officer assigned to perform the various roles incumbent on the SCM must inquire thoroughly and impartially into the matter concerned to ensure that both the United States and the accused receive a fair hearing. Since the SCM is a streamlined procedure providing fewer protections and rights, the maximum possible punishment is very limited. Furthermore, it may try only enlisted personnel and only those who consent to be tried by SCM.

A general court-martial is the highest trial level in military law and is reserved for the most serious offenses.

How to get a copy of your DD Form 214: http://www.archives.gov/veterans/military-service-records/

How to upgrade your discharge: http://arba.army.pentagon.mil/